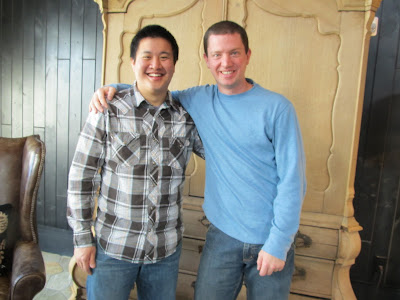 Twelve years ago, I was a sophomore in college. I was walking on campus one day and I saw an Asian guy and a Caucasian guy laughing hysterically together. I had no clue who they were but inside I kind of thought, "I wish I knew them. Because I love to laugh. And they're laughing and I bet that means we would laugh a lot together." Little did I know, 3 years later the Caucasian guy would ask me to marry him. 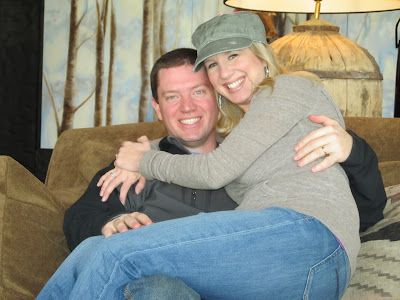 12 years later Nathan and Eric are still the best of friends and still love to laugh. And, thankfully, Eric is married to wonderful Megan, who has become one of my best friends. 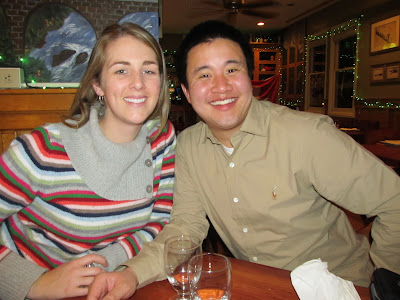 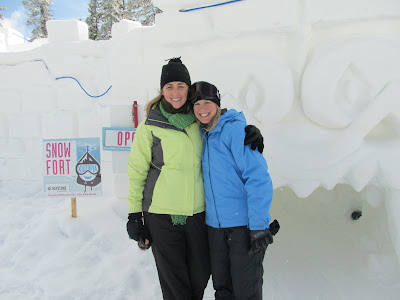 Megan and I surprised them with a joint 30th birthday trip to Breckenridge, Colorado last week!

The rules were:
1. The boys can ski all day every day.
2. The girls don't have to ski ever.

It was gorgeous. Relaxing. Hilarious.

We laughed until we cried.
We cried until we laughed. (Actually, that was just me. I cried at the top of the snow tubing hill because I'm scared of heights. And then I laughed at myself for being such a huge baby.) 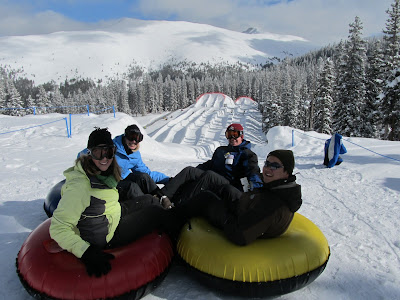 The guys were in their ski gear from the time they woke up until the slopes closed.

Megan and I read. We exercised. We napped. We ate. We rode a gondola. We shopped. We drank coffee. We watched a woman gallop on a treadmill.

We ate at fancy restaurants almost every night. The kind of restaurants that have words on the menu like "remoulade" and "truffle oil" and "osso bucco" and "lychee". We said words to the waiters like, "Huh?" and "What animal does that part come from?" and "We're not very refined" a whole bunch. It was awesome.

It was a huge blessing to spend some time away with such dear friends.
Happy Belated Birthday, Nathan and Eric!

Oh, and Megan's post about our trip is waaaaay better than mine AND it has a video!!! So, go right now to her post at www.soongfamily.blogspot.com to check it out! 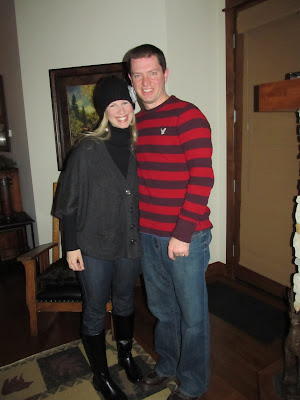 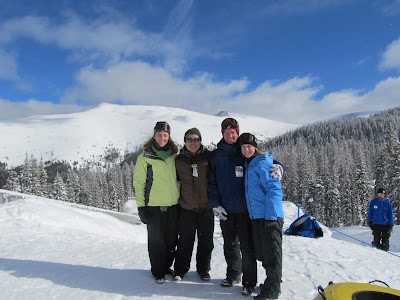 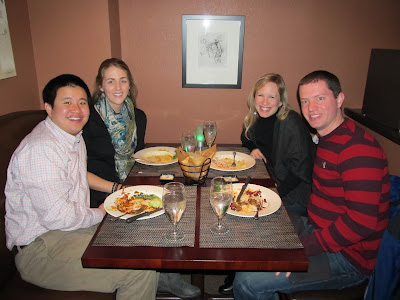 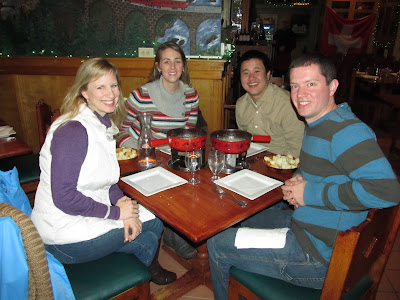 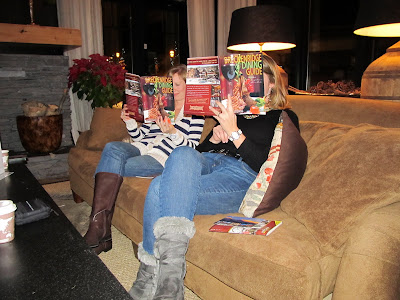 I realized it's been awhile since I gave an update on each of the kiddos. 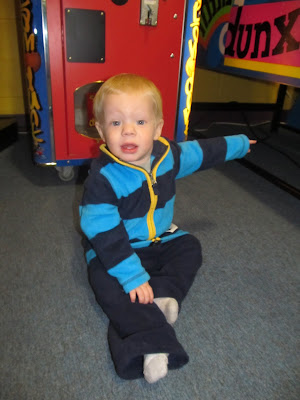 Connor Man:
*16 months old
*Still no words but he's working hard on "all done" and "night night". It sounds like "Ah La" and "Ah Ah".
*He loves, loves, LOVES spheres.
*He is everywhere at all times except wherever I am which means I'm constantly looking for him amidst the mess of pots and pans on the floor, nail polish on the carpet, and bottles of open poison.
*He is really into squealing which is a neat stage and I hope it never ends.
*He loves to dance and jump.
*He loves when I sing to him. It helps that I have the voice of an angel. 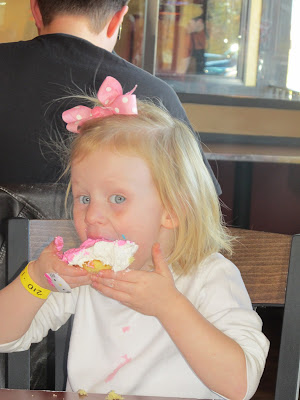 Reaganator:
*44 months old
*Princesses and ballet are two of her biggest loves.
*She continues to be obsessed with her 2 imaginary friends, Benny and Moss. Last week, she married Benny. It was a beautiful ceremony.
*For Christmas, she got the game "Pretty, Pretty Princess". The person who gets all the jewelry on first wins the game. This game was made for her and she has demolished Nathan and me at it every single time.
*She loves to dress herself. Yesterday, we went to the mall and she wore a red and white Christmas shirt (yesterday was January 18th), bright pink pants with huge hearts on them, and red patent leather heels. Just another normal day.
*She is a strong thinker and a natural leader. And she's hilarious. I am so in love with her personality. She can struggle with being bossy but we're praying together about that.
*Eating continues to remain the absolute lowest of the lows on her list of priorities. 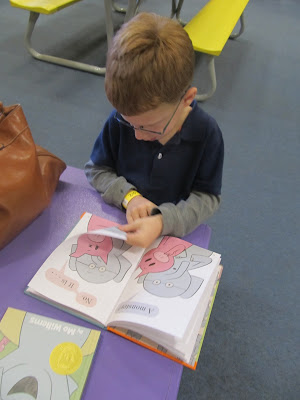 Landoni-Maroni:
*69 months old
*LOVES school. LOVES his friends. LOVES his teachers.
*The past two months have been difficult. He is very strong-willed, decisive, and passionate. All wonderful characteristics. And very challenging as well. And we're working through ways he can handle himself when he's angry or disappointed or when he has an opinion that is vastly different from Nathan and me. But the last several days have been great. Nathan and I don't want to stifle his personality but we also want him to honor and obey us. We've learned loads these past couple of months and it's been very humbling for sure!
*He continues to wear glasses and patches and he does a wonderful job keeping up with them and remembering when to patch.
*He starts basketball in a couple of weeks and is so excited!
*He loves Reagan and Connor like crazy. Yesterday he surprised them and toasted their waffles, set the table, and had breakfast ready for them when they woke up.
*Last night he told Nathan, "Daddy, I've decided that I'm going to start making money so you don't have work anymore and you can be home with us more in the daytime." Then he looked at me and said, "Mommy, can you start paying me when I do my chores?"
Posted by Christy at 4:34 AM 2 comments:

Dedicated to my Photography Friends.... 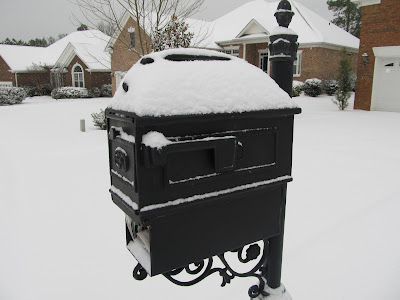 I've always admired photographers. I'm not one. So I think it's neat when they do stuff like make things fuzzy in the background and make their kids' faces really focused. Or they do that thing where they take a picture while someone's throwing a kid in the air and it comes out clear and not all smeared like mine do. But the thing I'm most intrigued by is how they like to focus on something like a teacup or a chair or some other inanimate object. In theory, that sounds boring. But my photography friends like Lori and Ellen do that kind of thing all the time and they post it on their blog and I get all emotional. I think Lori posted a picture of her fencepost one time and I looked at it for a good 1-2 minutes. Who cares about a fencepost? Why did I care about that fencepost? It wasn't even my fencepost! But it was so pretty and I thought about deep things while I looked at it.

So, I tried that this week. It snowed and the kids were in the backyard. My husband asked me to take some pictures of them but I was like, "Ok, but first I need to take a picture of something that's not a person. Like our mailbox. Because that's what real photographers do."

And when I looked at the picture of my mailbox, I felt nothing. All I thought was, "We get letters and bills out of that thing each day. Oh, and also there's snow on it." I thought waaaay less things about my own mailbox picture than I did about Lori's fencepost.

Dear photography friends, my respect for you went up a billion percent after my mailbox fiasco. You are really good at what you do. And I'm going to go back to taking pictures of human beings.
Posted by Christy at 5:48 AM 4 comments: 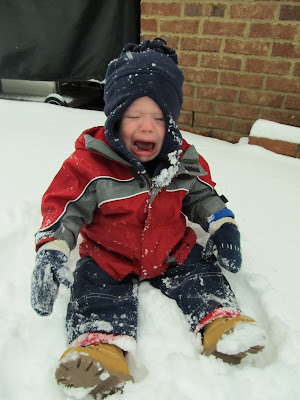 Can I get a copy of that?

I love to people watch.

Especially in January. Especially at the gym. Because I see a whole lot of new faces and if an actual thought bubble popped out of their head it would say, "My new year's resolution is to lose weight so here I am. I hate being here. What are those big machines over there? I want a cheeseburger." I giggle inside my head because I know they probably have good intentions but I also know in about two weeks I'll never see them again. Until next January.

I made the executive decision to not be a crafter. But I'm still going to make 3 crafts. One of them is a coffee filter wreath. I copied it from Heather. A second craft is about to be hung above my sofa. I copied it from Megan. And a third craft is going to be refinishing a mirror. I copied that from the Internet.

I'm in love with the show "Top Chef". I loooooove to cook but I'm not a chef. Because when I cook I start by walking to my file of recipes, picking one, and copying it. Making "my own version" of a recipe looks like adding a little more salt or throwing in some garlic. A copier of recipes I am. A chef I am not.

Ready for the inevitable analogy to teaching? Thought so. Here you go.
I don't think there are a lot of teachers. I think there are a lot of people that have been hired to fill teaching positions. And I think there are few actual teachers. People-that-have-been-hired-to-fill-teaching-positions say things like, "Can I get a copy of that?" or "Can you buy me that program that teaches kids to read?". Teachers say things like, "Programs don't teach kids to read. I teach kids to read" or "I can't make a decision about that until I get to know the learners in my care" or "No thanks. I don't want a copy of that. I'm not sure it meets the needs of my class."

I love teachers. And I've been blessed to know and work with actual, real-life teachers. They make me smile big time. Teachers are purposeful, thoughtful decision makers and relationship builders.

People-that-have-been-hired-to-fill-teaching-positions are the opposite of all of that. They're copiers. They're in survival mode. They're walking around lost looking just like I do when I walk into a fabric or craft store. And if they don't grow professionally they'll just continue to call out, "Can I get a copy of that?"

And we wonder why kids aren't learning.
Posted by Christy at 6:21 AM No comments: